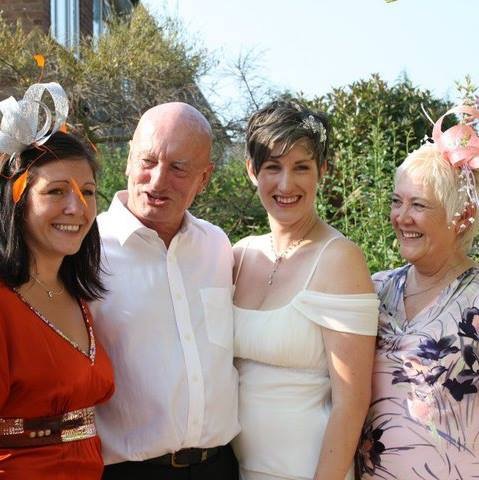 This time 3 years ago I was sat beside my dad waiting for him to die. Only 6 short months previously after some minor health niggles and suddenly struggling to do his usual level of manual work as a bricklayer, my fit, strong 62 year old dad was suddenly being probed and scanned to discover that the insidious sneaky bastard we call cancer had been gnawing away at his lungs and guts to the point it couldn’t be stopped. Our world was suddenly and horrifically turned upside down as we tried to comprehend he would soon be gone. The man who had been my dad for nearly 40 years, the man my children called granddad, my mother’s husband and best friend of the best part of 5 decades was dying.

Amid those 6 months I did what I do with most things, I questioned what we were told, I asked difficult questions and I researched. By no coincidence I had decided to follow through on my decision to take a doula preparation course despite the ad-hoc palliative treatment and numerous emergency hospital admissions to control his symptoms, I undertook training to support families who were bringing new life into the world, I welcomed this other focus but the irony wasn’t lost. However, what I also noticed was the parallels between these events: preparing for death is a lot like preparing for birth.

As I write now having birthed 4 of my own children and supported around 18 other women in giving birth, I have grown accustomed to that familiar anticipation; the “inbetween” of pregnancy and birth filled with trepidation and wonder. The question of when will it happen: today, tomorrow, next week? Will I cope? Will it be ok? Will I be scared? Will it be as I planned? Will I be well supported? The simultaneous feeling of both dread and curiosity of labour starting. These are the same thoughts and feelings I had waiting for my dad’s death and that of my grandmother’s just 14 months before his.

My dad died just 2 years after the birth of my 3rd child Sam. My previous 2 children were born at 41 weeks gestation so when I found myself still pregnant with Sam at 42 weeks I was in unchartered territory. Having given birth very simply and easily at home previously I found the pressure to go to hospital for a medicalised post-dates induction really stressful. It wasn’t what I wanted yet all the medical people told me I was now risking my baby by leaving things to nature. My wishes were thought silly, my experience was second to their protocol and I had to battle hard to have my autonomy respected. At 16 days past my guessed due date I caved in to the mounting pressure and accepted an induction and gave birth quickly and easily the next day.

It’s different when you’re dying. Your voice is heard more easily. My dad who was also born at home, planned along with his care-providers and us to make plans for him to die at home too. We all felt that being at home with all of his family with him would be the best way to go. We wanted to surround him with love as he said goodbye to us.

However, as with birth plans, death plans can also go awry. After battling to control the blood clots in his lungs we managed to get him home on 21st January, his 63rd birthday and he was comfortable with just some oxygen and oral morphine to control his pain. To celebrate he asked for a savaloy and chips from the chippy and that was the last meal he ate.

We knew he could have a morphine driver once the oral medicine became insufficient analgesia but during the night of 31st January, my youngest son’s 2nd birthday, his pain became unmanageable and he was admitted to the oncology ward the next morning.

“The sorrow of death is in direct juxtaposition to the joy of birth but with equal feeling of love and connectedness.”

It took a long 24 hours to get him comfortable and by then he had decided he didn’t have the energy to make the 30min journey home again. So knowing we were facing the very end of his time with us we prepared as best we could for a “hospital death”. The room had a sofa and a camp bed and for the next 4 nights we kept a bedside vigil. Just as in a few days after a birth, a few days before death family came to visit. Saying unspoken goodbyes, giving hugs, kisses, “I love yous” knowing it was the last, fighting back the tears, hiding our fears , trying to make it be ok and giving him strength to face the inevitable. The sorrow of death is in direct juxtaposition to the joy of birth but with equal feeling of love and connectedness.

For the final 3 nights, my Mum, sister and I stayed constantly by his side. Snatching sleep, chatting in the quiet hours of darkness, reminiscing, laughing, watching over him as the morphine took away his ability to communicate. We advocated for him, making sure he had adequate care and attention which amounted to actually being left alone really, this suited us as we drew together, drawing strength from our collective love for him and each other.

We were in a little bubble. Just like a birth. The same intensity, the same disconnect with the outside would, the focus is on what is happening now. Dealing with the peaks and troughs of “things happening” and “not much happening” wondering if “this is it” as his breathing changed and calling the doctor who says “yes, it’s nearly time” as we prepare but not quite sure how. It’s so very familiar for anyone who has been at a birth.

Just as he always did things, he stubbornly held on a bit longer and made it through that last night. The morning shift came on and we all showered and got some breakfast. There had been no change for some hours so I started to watch a show on my iPad but before the opening credits had finished the room changed. I took my earphones out and watched as my mum and sister moved close to him. I saw their faces and heard his breathing was different. Again like birth, you can feel when “it’s time”.

I recall birthing my last baby, born rapidly at home before the midwife arrived when I realised “this is it” it was actually after my husband and doula had that feeling. As I pulled her up out of the water I waited for that first breath and as is typical of water-born babies it wasn’t immediate. I spoke to her, gently rubbing her and blowing her face, anticipating the moment as she entered our world and “came to life”. It was the mirror opposite of that moment in the hospital with my dad.

“We waited after each breath wondering if there would be another until finally there were no more and he was gone.”

We knew this was it. I held his hand. We all told him how much we loved him. We told him he didn’t need to worry about us, that we would be ok and he could leave us now. He hadn’t spoken or responded for 2 days but as we spoke to him and the pauses between his breaths got longer, tears silently rolled from his eyes. He could hear us. He was saying goodbye even though he didn’t want to leave us. We waited after each breath wondering if there would be another until finally there were no more and he was gone.

Before my grandmother and father’s deaths I don’t recall anyone describing death to me. Aside from accidents and sudden acute illnesses like a heart-attack I had no real knowledge of how a person dies. Death even more than birth is taboo and much like the “good birth”, “good death” is thought of as some kind of myth or impossible ideal. However, what I did notice was the respect with which my dad was treated. Him dying was given appropriate reverence. Our privacy was respected. He wasn’t given unnecessary medication or examinations just so they could check things off a list. Protocol was flexible and his experience and feelings mattered. We were blessed to have my friend and neighbour working on shift that morning. She and her colleague, with our enthusiastic consent, attended his body afterwards. They cleaned him, removed cannulas and dressed him in clean pyjamas. It was a comfort to know he was attended with love and his dignity was intact even in death.

I wish I could say the same of birth. If we can treat dying people and their dead bodies with such care, reverence and respect and acknowledge how they and their family experience the event as important why do we still not apply this to the other end of the spectrum? Considering that the experience a birthing woman has will stay with her as she lives the rest of her life, surely that is important.

Women giving birth need to be given privacy, security and the sense that they are important and her wishes are not insignificant.

“We need no more to help a woman birth than we do to help people die.”

Birth and death are not medical events but biological norms. We need no more to help a woman birth than we do to help people die. That is to just let it happen and only intervene when there is a clear need to do so. It’s a pretty simple concept that we should be able to apply in both scenarios. I hope one day that it is just the normal way we do things.